The Struggles of Being a Progressive Zionist

Author’s note: This editorial is in no way intended to invalidate the Palestinian experience and suffering. My focus in this article is on the relationship between Zionism and Progressivism rather than the Israeli-Palestinian conflict.

Up until recently, I never thought of my support for Israel as controversial. Throughout my upbringing, I was taught that Israel was the homeland of Jewish people, and as a result, I always felt a sense of connection to the country. We celebrated independence day on May 14th, had Israeli flags around the house, sang Hatikvah, wore IDF sweatshirts, and so much more. Every Passover, we say, "Next year in Jerusalem." Let me make it clear that my feelings about Israel have not changed. The sense of hope that floods my body when I see the Ben Gurion statue at the Tel Aviv airport will never go away. I proudly identify as a Zionist; however, I've learned that not everybody shares this same perspective.

I was never taught about the Palestinian perspective or the Nakba. Therefore it honestly shocked me to learn that some people do not even acknowledge Israel's existence. I've also noticed that the most notorious critiquers of Israel come from the left, the party with which I identified with. So, I felt like my Jewish and political identities were conflicting. The right's issue with Jews is a little bit more direct; fascist groups like the Proud Boys are antisemitic because they are white supremacists, and to them, Jews aren't white. On The left, however, anti-zionism can often be disguised as antisemitism. Leftists believe that Jews are white and therefore contribute to white supremacy and apartheid, specifically in Israel. Jews are often excluded from progressive activism because they are considered white and therefore not a minority subject to threat. Though most Jews living in the US are indeed Ashkenazi, meaning that they ended up primarily in Eastern European countries during the diaspora, they benefit from white privilege. However, claiming all Jews are white erases the identities of Mizrahi, Sephardi, and Ethiopian Jews who do not necessarily identify as white.

Moreover, Judaism is a religion and an ethnicity originating in Judea, which is modern-day Israel/Palestine meaning that they cannot contribute to white supremacy. The left often has trouble acknowledging the indigeneity and ethnicity of Jewish people in Israel. So, in what specific ways is it a challenge to be a Zionist in progressive spaces?

Like my Zionist identity, my progressive one is significant too, and it was not until recently that I experienced those two things being conflicting rather than going hand in hand. To me, Israel ensures a home, a guarantee of safety for the Jewish people in their ancestral homeland. I honestly had difficulty grasping how that could be the awful thing that many people make it out to be. With the rise in popularity of certain democratic congresswomen, aka "The Squad," this Anti-Israel sentiment has become more and more widespread and normalized. “The Squad” is made up notably of Alexandria Ocasio-Cortez, Ilhan Omar, and Rashida Tlaib, genuinely activists and leaders that share many of my beliefs. They are vocal supporters of Black Lives Matter, LGBTQ rights, climate change, and Indigenous Rights, all causes I care deeply about, however, my support for them must be with caution to protect my own identity. As a Jewish woman, I am not necessarily included in their activism. To them, Jews are not a minority group that needs a voice in progressivism. I do not feel like I can identify with these inspiring women because of their outward support for BDS and other organizations that aim for the destruction of Israel and their use of antisemitic tropes such as blood libel and Jewish money. At the same time, they only agree to meet with Jewish groups like Neturei Karta and Jewish Voice for Peace, which does not amplify nor represent Jewish voices.

Groups like Jewish Voice for Peace are among the most significant threats because they amplify anti-Israel voices by claiming to represent Jews as an entirety. The name is undoubtedly ironic because JVP is most definitely not a Jewish voice and does not promote peace. Although Zionism is indeed a nuanced term, it means the Jewish right to self-determination. By being "Antizionist," you are inviting in antisemitism because, whether intentional or not, anti-Zionism and antisemitism often go together hand in hand. Denying the Jewish people a right to self-determination is antisemitic. This organization's issue is that they throw the word Jewish in their title to justify antisemitism. Some of the most heinous claims made by Jewish Voice for Peace are "you cannot be anti-racist and Zionist." This claim entirely erases Jews and Zionists who have fought and advocated for black lives and excludes Jews from other progressive groups. It normalizes an anti-Israel sentiment that can be very harmful to Jews.

Recently, JVP hosted a panel called "Dismantling antisemitism," which sounds like a good thing in theory, right? Wrong. The choice of speakers included Rashida Tlaib, a congresswoman from Michigan and a member of "The Squad" whose parents are Palestinian and who has expressed her anti-Israel views very vocally; Marc Lamont Hill, who was fired from CNN for antisemitism; and finally Peter Beinart, a Jew who does not represent the majority of the Jewish community (The Jerusalem Post) and Barbara Ransby, a BDS activist. BDS advocates for boycotting Israel, divesting from Israeli companies, and sanctioning the Israeli government. BDS is, however, inherently antisemitic; it boycotts only Jewish businesses. If it is to promote peace, why does it not also boycott Russian or Chinese companies, as they are countries with appalling human rights violations? BDS's goal is a one-state solution that essentially calls for the destruction of Israel. BDS leader Hatem Bazian has claimed that Jews "kill, rape, smuggle organs and steal the land of Palestinians." This feeds into the ancient Antismetic blood libel trope where Jews were accused of killing and drinking the blood of innocent children. This organization also regularly accuses Israel of being an Apartheid state, which completely erases Jews of color, claiming that Israel/Palestine is a racial conflict. Of course, JVP is a dedicated supporter of BDS, which makes us think, is JVP's agenda really to promote peace and combat antisemitism? Or is it more to justify antisemitic acts on Israel by claiming to be a Jewish organization?

The women's march was the first instance where I experienced the conflict of being a Jewish progressive. It was 2017, and I felt like an empowered 12 year old and excited to go to my first Women's March in New York City. My grandma is a raging feminist, and her beliefs rubbed off on me, so naturally, I was pumped to attend with her. I remember my disappointment, though, when she called me and told me we were no longer going because the organizers didn't want Zionists there. I remember feeling devastated. My grandma explained that they were not allowing Israeli pride flags and that one of the leaders, Vanessa Wruble, had quit due to antisemitism. I took it upon myself to do my research. Sure enough, Linda Sarsour and Tamika Mallory, two of the women organizing the march, were vocal supporters of Louis Farrakhan. Mallory even once referred to him as the "GOAT," meaning greatest of all time. Louis Farrakhan is no AOC, as he is not merely an Antizionist; he is a vile antisemite. According to the ADL, he has claimed that "Jewish people were responsible for the slave trade and that they conspire to control the government, the media, and Hollywood, as well as various black individuals and organizations. He frequently denies the legitimacy of Judaism—or Jewish claim to the land of Israel—arguing that Judaism is nothing more than a "deceptive lie" and a "theological error" promoted by Jews to further their "control" over America's government and economy. In addition to their support for such a hateful person, Mallory and Sarsour allegedly told Wruble that "Jewish people bore a special collective responsibility as exploiters of black and brown people" to justify their exclusion of Jewish women.

Despite all this, the place in which there is the most blatant antisemitism is on social media networks. Specifically TikTok and Instagram. Speaking about politics on social media can be dangerous as it leaves so much room for misinformation. I've watched numerous TikToks filled with blatant lies and exaggerations about Jews and Israel. I have received enormous amounts of hate and mean messages for merely claiming to be a zionist. I've seen comments like "is not real" and "Free Palestine" on any Jewish related post. These comments essentially claim that Jews are single-handedly responsible for the problematic actions of the Israeli government. TikTok somehow has managed to hold the word Zionist on the same level as Racist or colonizer. People over social media have told me it's impossible to be a Zionist and a Progressive as those two terms are "oxymorons." Many people saying things like this and spreading false anti-Israel information are white leftists who do not correlate with the conflict. The real issue is that Jews and Israel are not held to the same standard as other countries. It becomes an issue when Jews are blamed for the Israeli government's actions because this becomes a subject of antisemitism. We don't attack Chinese people for Xi Jinping's actions or other people for their government issues. People can twist any story to fit a specific narrative on social media, which can become dangerous.

It can be difficult to feel accepted in progressive spaces as a Zionist but, as Jews have for centuries, we must stay true to our values and beliefs, and we must remain persistent and motivated because if we as Jews don't, then who will? Although there are many examples of progressive movements and leaders that seem to marginalize Jews, let us not forget those who welcome us and adequately use our voices and stand by them. 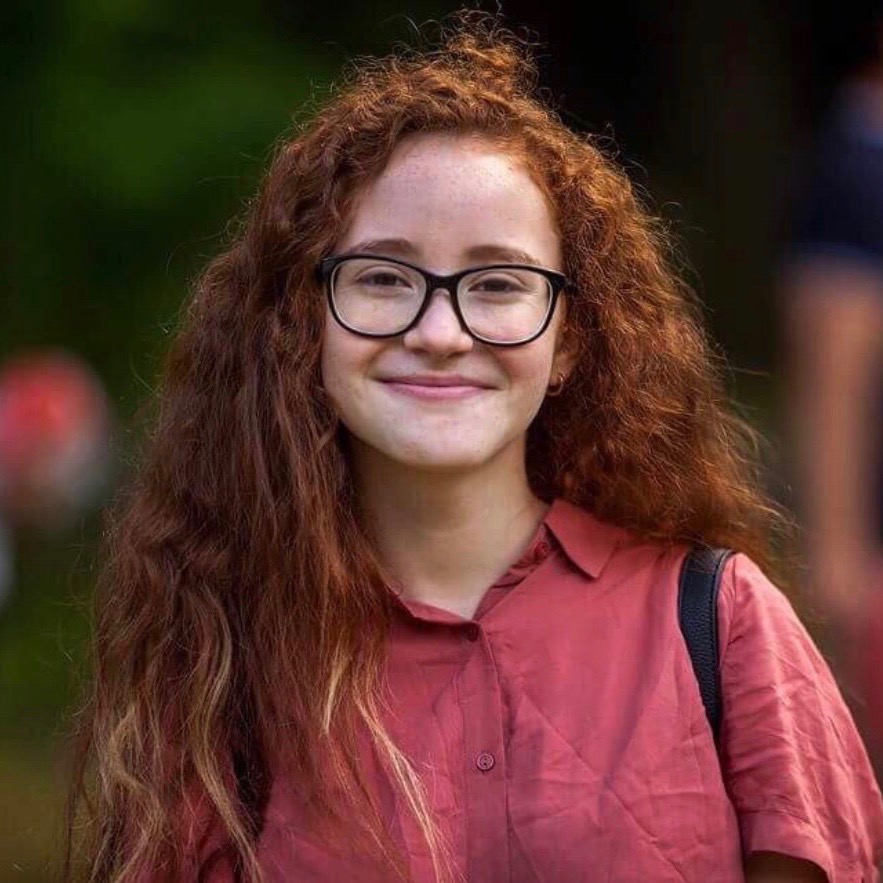 A reflection on Texoma Kallah.

For this parsha we are reflecting on the story of Passover, sacrifice, and freedom. Viewing the story in a lens of social justice makes us look at the world around us, and seeing the struggles of other communities and how we can help.