Growing up with a born-and-raised-Chinese mother that immigrated to France and currently living in Beijing, these are four core values I was taught consist the very foundation of the Chinese culture. But how surprising is it that these same exact values also consist the three pillars of my father’s heritage and teaching, from Jewish Moroccan descent?

Well believe me, I thought about this question quite a lot; in the glamorous article, “A Jewish-Asian love affair,” published by the Jewish Chronicle in 2016, Jessica Weinstein describes how a shared set of values between both Jews and Chinese could lead to more fusional and overall successful relationships. From Helen Kim and Noah Leavitt, co-authors of the book “JewAsian,” to Priscilla Chan and Mark Zuckerberg, it appears that those two cultures have a disproportionate ability to merge together, thanks to a number of shared skills, ethics, values and historical aspects.

For my part, the very first similarity I noticed between the two cultures that co-existed at home, was the value of education; I remember, as a young kid, spending hours and hours with my mother in the kitchen, practicing multiplication tables over and over again and having timed “multiplication contests” with her, my sister and my father. Funny anecdote; in primary school, my teacher would give us coloured belts (similar to the ones in judo or taekwondo) depending on how effectively we could resolve 20 multiplications in 2 minutes. I think by the time others were red belt level, my teacher had created a multicolour belt for me, after crushing the silver and gold belts and running out of imagination. But this multicoloured “multiplication belt” didn’t just belong to me: I also shared it with my mother and her cultural heritage. It is interesting to see how even now, now that I’m in high school, my parents still pay tremendous attention to my school and education; being an expatriate in China and therefore often moving to different countries, the decisive question when moving to another city always is: “Is there a good school for the girls there?” And actually, it isn’t a coincidence that both my Chinese immigrated mother and Jewish father have always put their children’s education first: Amy Chua, the famous “Tiger Mom,” was the first to describe this phenomenon of the “good impulse control,” which defines that idea that immigrants have to work harder in order to succeed; this pursuit of success essentially goes through providing the next generation with the best schools and teachers, education being the most effective tool to move from one social and economical status to another. This idea that minorities, such as Jews and overseas Chinese, have a generally overbalanced success, is without a doubt mainly due to a shared set of values, which springs from the mutual immigrant experience.

It is even more intriguing to go into more depths and look at the very core skills, the methodology and values that consisted my education; let’s go back to the multiplication contests, for example. How come I could be so much more effective than other kids? To me, the answer is (at least the one I was taught): “Practice makes it perfect,” in other words, hard-work and consistency. Indeed, as my father and mother would incessantly remind me and my sister, the key to effectiveness and particularly academic success, is repetition and consistency: it goes from repeating multiplication tables over and over again, to shooting baskets hundreds of time after trainings in school, to having my father gesture to me in ballet class, from his tiny wooden seat: “Do it again.” The mechanical reproduction and endless repetition of one precise gesture in dance, or of one particular movement in basketball, is what I was taught would make me “perfect.”

It was clear that both my parents had been inculcated with this characteristic trait, as both of them have valued and put a disproportionate emphasis on repetition and discipline as a key to succeed all along me and my sister’s education. And actually, this art of reproduction we were taught, is nothing other than a heritage from our Chinese and Jewish cultural background; indeed, in both cultures, we find the same emphasis on mechanical repetition. In Chinese traditional calligraphy, being able to reproduce one same character perfectly, with a particular gesture of the horse-hair brush, is considered an art. In Judaism, the art of calligraphy is also present, for example, when it comes to writing a Torah scroll; the Sofer Setam has the honourable duty of writing down the words of G-d in a scroll, which consists the holiest object of Judaism. In brief, there is no room for mistake when copying and reproducing, over and over again, the words of G-d or the characters of a traditional Chinese fresco. Compared to other cultures I have experienced, such as the French or American culture, I can testify that the emphasis in understanding and mastering notions in schools at a young age was way less on the mechanical repetition of certain skills, but more on experimentation, schematisation and on a playful way to engage children in assimilating skills and notions.

In short, the essential part of both culture’s values and ethics result from a common past, a shared history of insecurity and outsiderdom: the value of education for instance, provides a tool for populations to elevate from their low socio-economic status. But another value that is interesting to investigate when facing the challenges of immigrant-life is the value of community and family. Indeed, immigrant groups generally have the tendency to form close- knitted, sometimes isolated communities from the “outside-world,” which comes off as a natural reaction to the feeling of outsiderdom and insecurity which Chinese immigrants and Jewish populations have often experience throughout history. In both cultures, we find a past of persecution, discrimination and insecurity, going from the Nazi politics of the Second World War to the Chinese Exclusion Act of the United States in the 1880s, or the numerous Chinese-immigrants massacres in South Asian countries such as Malaysia or Indonesia. In most global cities, we even find a Chinese district, the “China-town” or a Jewish neighbourhood, where both traditions and people meet to form a close-knitted community; this goes to show the value Chinese and Jewish populations accord to communal life and ethics. (solidarity, mutual aid etc.)

Actually, that is probably one of the values I cherish the most in being Jewish and half Chinese: the value of community. To me, it is simply incredible that whatever city, country or continent you go, you will always have a home, a family, a community to be welcomed in. Being part of an expatriate Jewish family in Asia have greatly made me realize how far we have been able to rely on our community when arriving and moving to a brand new city. Kehillat Beijing is the perfect example. Every week for Shabbat, our self-lead community welcomes jewish tourists, visiting from all around the world, family members coming to visit their relatives in China, teachers, business women and men coming for a few days to work in the capital. Every week, for a few hours on Friday night, it feels like we escape the frenzy of work, of stress, obligations and responsibilities to all come together and pray. This goes to show the great importance of community in Judaism, which first comes to life every week on Shabbat. Similarly, Chinese immigrants have their own tradition of reunion, their own annual Shabbats: the Chinese New year or the mid-autumn festival. During those time of the year, Chinese families, regardless of logistics or work, reunite to celebrate the holidays together. I believe that compared to other cultures, Jewish and Chinese immigrated populations have built, throughout history, an exemplary ability to create communal networks around the world and have acquired a great sense of reunion and family.

These are the four core values both my Moroccan Jewish father and my Chinese immigrated mother share in common, among so many other similarities and differences, and the four values both my sister and I have inherited. Who would’ve thought that two, thousand old civilisations from the opposite side of the world could’ve shared so many similar values and ethics?

Clementine Assayag is a BBG from Paris, France, and is the founder of a charity organisation in China.

Want to run for chapter board but don’t know how? Then this is the article for you!

10 Tips to Dedicate Yourself to Online Classes

Are you quarantined and having trouble concentrating on online classes? Here are some tips to help you get the most out of this experience. 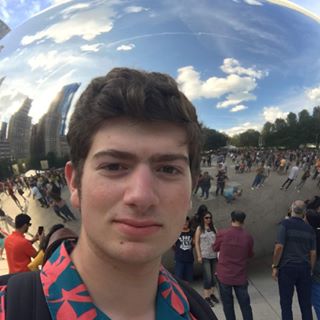 This year’s Fall Fest Mishpocha AZA took it to the next level by heading to Full Throttle.