On September 23, 2018, Kehilah BBYO of Liberty Region held its first event of the year, a paint party kickoff with nearly fifty people in attendance. The event brought in numerous prospects, with many joining throughout the following weeks.

As the event occurred on the first night of Sukkot, everyone created their own “sukkot” out of candy to start off the night. To begin the extremely messy night, the chapter introduced a program where one would throw colored powder on those with similar interests as themselves. Whether or not those attending the event came expecting to get messy, everyone returned home needing a shower as the night continued with both a paint-balloon toss and a slip-n-slide of paint and paint powder.

The plans for the night soon went awry as the organized paint party grew into a paint war; it became prevalent that Sam Rosenberg, Kehilah’s Godol, was covertly dealing paint out to everyone. Sam fired first, sparking the war when he hit Cooper Bell, Kehilah’s S’gan. Everyone began to toss paint powder at each other, a slight colorful fog forming from all of the paint in the air. Sadly, the war had to end once the chapter ran out of paint.

Overall, the night was extremely successful for Kehilah BBYO. As Kehilah’s split into separate AZA and BBG chapters is coming soon, it was amazing to attract prospects to both Kehilah’s upcoming AZA and BBG chapters. Everyone seemed to love the event and, despite taking place on a cold and rainy day, many in attendance considered it to be one of their favorite events.

Sarah Gruber is a BBG from Liberty Region and plays squash.

This year’s online events will set a new path for ICs ahead. 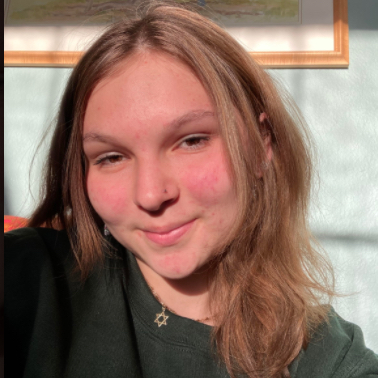 In times of isolation and limited social interaction, BBYO has made it possible for us to make new friends from all over the world through IC.