Frightened at the Fort Lauderdale Airport

Along with forty of my classmates and six staff members from my school, I was on my way to Los Angeles International Airport with the final destination of Fiji. We were all so excited about this community service-based adventure. Sitting on the plane, ready to take off, we were delayed due to mechanical issues. On the plane TVs in front of us, as well as alerts on our phones, the headline said “Shooting at Fort Lauderdale Airport.” There were so many questions that we did not have the answers to. Looking outside of our windows we saw tons of people running on the tarmac to safety. How could this be? We are at this airport? My friends and I continued to worry and comfort each other. Minutes later there was another alert that said “Fort Lauderdale Shooter Apprehended.” Suddenly the captains monotone voice over the intercom said, “Well folks, due to these mechanical issues we are going to be bringing in a new plane from the Miami Airport.” Getting off the plane after hearing “Shooting at Fort Lauderdale Airport” was not my first choice, but having some of my closest friends with me made me feel comforted.

Minutes later our lives changed forever. BOOM! BOOM! “Get down”, were the sounds that I heard before running towards the door to the tarmac, piling on top of one another, some classmates and some even strangers. A TSA agent put their code in the keypad to unlock the door and from there we all ran down the steps and hid behind the machinery. TSA agents and police officers were directing us to start walking along a set of train tracks away from the airport. Some of my friends didn’t have their shoes, some had just one shoe, none of us had our bags, and a limited amount of us had our phones but those were pretty much out of battery. Looking through the hundreds of people walking with each other, I started to look all over the place for my friends and staff in the same shirt as me. Looking left and right seeing more of my friends, we were being told to walk with our hands up in the air until we saw all the law enforcement agents. Continuing to travel along these train tracks to somewhere we did not know, we were all terrified, hot, and hoping that everyone was going to be fine. Twenty minutes had elapsed from when we started our journey and we had finally reached a white cement wall and we were finally able to put our hands down. Law enforcement agents were instructing us to get back and not move.

All six of my staff members were accounted for but not all of the students. There were three boys missing. One of them was my best friend and when I realized, my heart dropped into my stomach. Trying to call them was pointless because none of them were answering. I paced back and forth when suddenly an old man approached me. He made a comment about how nervous and uneasy I looked. He said, “I want to give this to you,”; the next thing I knew he was pulling a metal knife, like the one you would find at a restaurant, out of his pocket. Along with the knife, he pulled out a small plastic package; in the package was a necklace with an emblem on it. The emblem had an image of Saint Christopher. Saint Christopher was originally known as a Catholic notion but has been spread across a vast amount of people and religions. Saint Christopher is represented as the protector against death while traveling.

With no thought, the man told me that he wanted me to be brave and to know that everything was going to be okay. I thanked him and he walked away. As time grew longer, we were finally instructed that we could go. More walking along the train tracks, I clenched onto the necklace around my neck. As we approached the yellow and black caution tape separating us from our loved ones, my friends and I ran under the tape hugging and crying each other.
Now, 2 years later, every time I travel near or far I wear that necklace. Having that necklace makes me feel a little bit safer and brings me back to a time where I was most scared. Lastly, this event has taught me that the smallest gesture can impact someone's life in the biggest way.

Amanda Baritz is a BBG from Gold Coast Region and BBYO is her life!

Our Global BLUEPrint: An Adventure at the National Aquarium 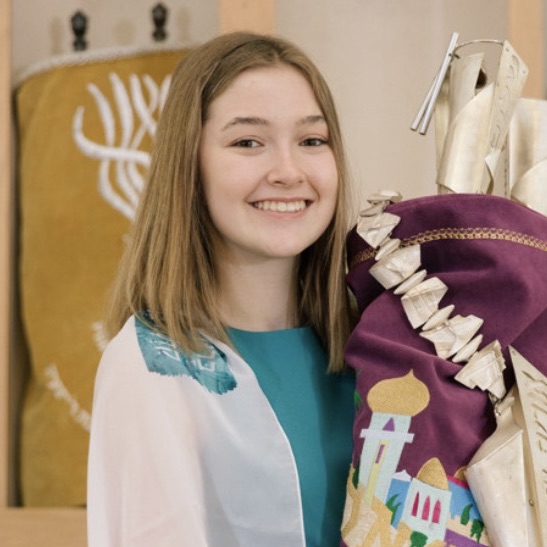 Take a look at a behind-the-scenes tour of the National Aquarium during IC 2022 LEADS Day!

Calling all of the Swifties! Find out what Jewish holiday you are based on your favorite album.

What It Means to Be Free